The Second Session of the 54th Legislature

Consider what has happened since the Democrats took total control of the legislature in 2019:

As Governor Michelle Lujan Grisham said recently, “… after 6 months: ‘We have a long way to go’”  (https://www.abqjournal.com/1338147/settlements-reached-with-three-mental-health-providers.html)

Look at the 2019 NM Legislature – this ratio has to change.  NM is out-of-balance.  One party rule will not give New Mexicans a voice; it will be a tyranny of the minority. 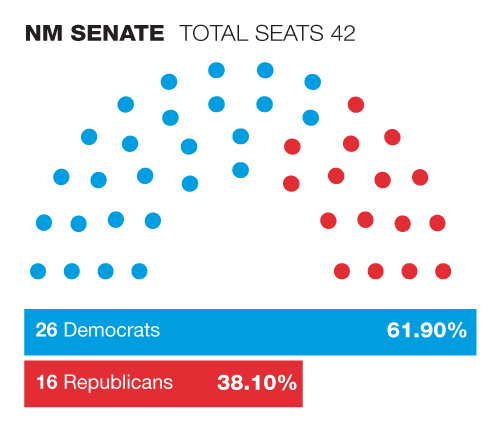 March 18, 2019  – The 54th Session of the NM Legislature is over – thank goodness!  They certainly tried to do as much damage as possible by raising taxes, taking away some of our freedoms, killing jobs, proposing outrageous spending bills and squandering of taxpayer’s hard earned money and so much more.

The NM Legislation opening day was January 15, 2019   and closed at noon on March 16, 2019.  Any legislation not acted upon by the governor by April 5 is pocket vetoed.  June 14 is the effective date of legislation (not a general appropriation bill or a bill carrying an emergency clauses or other specified date).

A summary of total bills proposed is:

Some of the key bills signed into law by Governor Michelle Lujan Grisham are:

(Creates the Early Childhood Education and Care Department (ECECD) as a cabinet-level department to manage, operate and administer all early childhood education, early pre-kindergarten and pre-kindergarten education programs and eligibility, child care assistance programs, and the Early Childhood Care and Education Act (birth to age 5). The first segment of the bill relates to the structure, responsibilities and duties of the new department and the later segment makes reconciling name and several substantive law changes to existing sections of law.

“The Energy Transition Act is a promise to future generations of New Mexicans,” Gov. Lujan Grisham said. “When we were presented the chance to move toward cleaner sources of energy, we took it, boldly charting a course to a carbon-free future, permanently centering our commitment to lower emissions and setting an example for other states. Crucially, this legislation does not leave our neighbors in San Juan County behind, as we will provide millions for trainings and economic development.”

Senate Bill 489 ensures greater renewable energy production while providing tens of millions of dollars of economic and workforce support for communities impacted by coal plant closures, as well as the development of renewable replacement power in San Juan County.

The legislation raises New Mexico’s renewable portfolio standard to 50 percent by 2030 and 80 percent by 2040, in addition to requiring 100 percent carbon-free energy by 2045 for investor-owned utilities.

Proposes to amend the Homeowner Association Act to broaden its applicability; provide for alternative dispute resolution; amend disclosure requirements; and give homeowner’s associations authority to levy reasonable fines for violations of or failure to comply with any provision of the community documents. Provides for removal of board members; holding of annual meetings; enforcement of covenants; and dispute resolution. Sets or limits fees to be assessed for preparation of a Disclosure Certificate.

Senate Bill 8 creates a new section of Chapter 30, Article 7 NMSA 1978 making it unlawful to sell a firearm without a background check. Senate Bill 8 prohibits the sale of a firearm without conducting a federal instant background check if the sale is made for a fee or other consideration. The bill excludes the sale of a firearm by a person who holds a valid federal firearms license; to a law enforcement agency; or between two law enforcement officers authorized to carry a firearm.

Some key bills passed by both Houses and sent to the Governor for signature are:

When signed into law, this bill will raise taxes by $580 million a year.  The state is projecting a $1.1 billion surplus but says it still need to raise our taxes to diversity taxing sources.  The State says because our energy market is volatile we need to chart a different course than our neighboring states.  Please note that NM ranks 8th in the nation in energy production and is expected to have another surplus next year from oil and gas revenues.  Highlights of this bill are:

To summarize these HB 6 changes will make NM less competitive with other states, hurts the middle class, and job creators.  Please note that the last administration that raised personal income taxes was Governor Bill “Pay to Play” Richardson, another Democrat.

This bill allows “qualified” voters to register during early voting periods.  Qualified voters may register to vote at the Motor Vehicle Division (MVD) or when receiving public benefits.  The Secretary of State, Taxation & Revenue Department (TRD), and the Human Services Department (HSD) all indicated this could be done at a minimal cost with no additional appropriations needed (we all know how accurate the Government is with those budget estimates!).  These departments have to develop procedures to address proposed changes.  Unfortunately, HSD does not have a process to identify if a qualified elector has completed another voter registration at another State of NM Agency.  There may be issues with some of the language in this bill as well as the process itself.   The Senate accepted six House amendments to this bill, including allowing a qualified elector to register to vote or update a registration at a voting location on election day beginning January 1, 2021.  These changes increase the probability for voter fraud by overloading the county clerks with an increasing burden to verify that a person is a “qualified voter” with a verifiable address and that this person does not have duplicate voter registrations from other State Agencies.  The number of provisional ballots could increase significantly on election day.

A bill that would remove criminal history questions from initial job applications in the private sector is headed to the governor’s desk.  Under the new bill, private employers may take prior convictions into consideration after an initial review of the job application and a discussion of employment.  See https://www.kob.com/politics-news/ban-the-box-bill-sent-to-new-mexico-governor/5276417/ for complete article.

Gov. Michelle Lujan Grisham has signed the law to increase the statewide minimum wage to $12 an hour by 2023.

One business owner expressed the potential impact of this law as follows:

“Others argue this increase might not be a win for all. New Mexicans worry that family-run and small businesses, especially in rural parts, will be hurt.

“But it is going to be a struggle for the next few years, it will be a struggle,” said Gerald Martinez, owner of the Stop and Eat.

Martinez said they’re not worried about the phased-in increases, but worry upping the minimum wage might make other businesses, well, go out of business.”

For a comparison of New Mexico minimum wage rates with other states, go to:  http://www.ncsl.org/research/labor-and-employment/state-minimum-wage-chart.aspx#Table

Governor Grisham has signed this bill.  It totally destroys New Mexico’s standing in determining who will be the winner of Presidential elections.  The electoral college provides small states with representation that the national popular vote does not.  In essence, NM has no voice in national elections.  A site page will be added to explain the purpose of the Electoral College and why it is so important for states such as New Mexico to be in the Electoral College.

2019 NM Budget – Gov. Michelle Lujan Grisham rolled out a $7.1 billion budget plan. The spending plan for the 2020 budget year would increase year-over-year state spending by $806.6 million over current levels.  It increases minimum New Mexico starting teacher pay to $41,000 per year, adds an extra three days to the state’s school year and ramps up state spending on statewide pre-kindergarden programs to unprecedented levels.  It increases public school spending by 18% and higher education by 3.3%.

2018 NM Budget – $6.32 billion. Of this budget approximately 57% of all dollars go to education ranging from Pre-K to Higher Education.

Legislative Definitions (https://www.nmlegis.gov/Glossary).  Information not contained in the glossary is highlighted in bold print.